We had a 3 boat trip today with young men from a Boy Scout troop in Kansas. Their troop came down to Keystone Lake for camping and fishing fun. 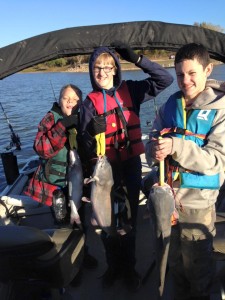 It was a tough bite today with calm water and blue bird skies.  We caught the majority of our fish anchored in less than 3 feet of water on fresh gizzard shad.  The gar have moved in by the thousands in the deeper water around that area.  Big fish was around twelve pounds and we caught about fifteen good keepers for them a mess of fish.  We spent a good majority of the time taking the kids on a boat ride.  They loved sitting in the front of the boat going across the lake.
They are going to enjoy a fish fry around the camp fire tonight!!!
The blue catfish bite will only get better as the water cools down.

My kids decided they wanted fish for dinner tonight, so we made a quick run to our closest lake, Copan, to catch dinner.  I also wanted to try the transducer placement of the Humminbird 1199 that I installed.  We arrived about 12:30 and scanned the lake for a couple of hours trying out the Humminbird and also caught bait.

We set up to drag baits and quickly started putting blue catfish from 2-5 pounds in the boat for dinner.  We were dragging baits with the MinnKota Terrova going .5-.7mph and we had just a slight breeze from the west.  Depths ranged from 22-32ft deep.

My daughter who is generally more content watching someone else catch the fish decided she wanted to catch learn how(proud dad moment).  Without going into too many details to make it confusing, I told her to reel as fast as she can and leave the rod in the rod holder if a rod goes down.  A couple minutes later as I was rigging another rod, I look up and she’s reeling down on a nice blue catfish!!!  She is excited to catch dinner and I’m a proud dad!  Thank you Team Catfish Double Action Hooks for doing their job and making my daughters first attempt at hooking a catfish successful.  She hooked a couple more to get us enough for dinner tonight! 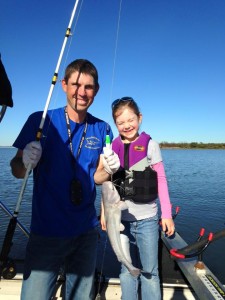 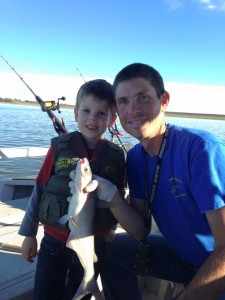 My wife and I decided we had about 10 more minutes to fish when a rod looked like it got tangled in some trash or something.  It just went down a little as we were dragging along.  Then I noticed it was going to the right, so I reeled down to bury the Double Action hook.  I quickly found out it was a heavy fish.  My kids wanted daddy to reel it in….if I have to :).  It came up and went back to the bottom three times.  What fish fights like that…..Flathead!!!!   A quick net job by my wife and my kids got to see a nice flathead.  It weighed 38 pounds.  A nice solid fish to end a nice family day on the lake.  We said good by as we let the flathead go back and hunt in the depths of Copan Lake.  Time to clean fish and go cook dinner! 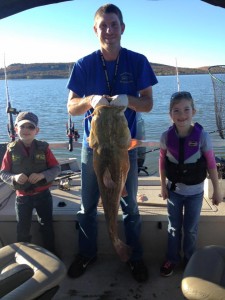