Dom and I made the adventure down to Lake Tawakoni in Texas for the Cabela’s King Kat  tournament.

Pre-fishing on Friday, we really wanted to establish a pattern that we felt would hold for the day of the tournament.  We started graphing mid-depth water close to channel edges to get an idea of what the bait was doing.  We marked lots of bait, what appeared to be threadfin shad along a 20-30ft flat.  It was very thick with scattered catfish all around.  The bait was not broken up, so they weren’t feeding catfish.  We took note of the situation and moved on. 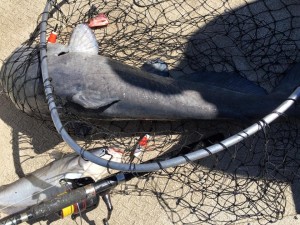 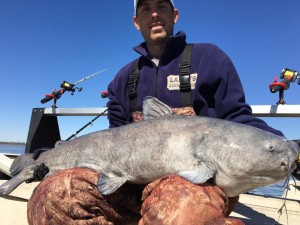 Next, we wanted to check on some shallow water options that are usually good this time of year.  However, after checking, we didn’t see much shallower than 16ft today.

Next, focus on break lines close to the deep fish and bait we marked looking on the down wind side.  We found some active fish on a break from 30ft of water up to 14ft.  We anchored up and caught a few.  After those bites we left.  Don’t want to wear out an area.

We then decided to head to another area utilizing the same pattern.  After searching for a couple of hours, we never did find anymore feeding fish.  We decided to call it a day, go eat some dinner, go to the captains meeting, and get a good nights sleep.  4am will come early

Up and ready!  Launched and headed to the area we left fish biting the day before.  We marked lots of feeding blue catfish!!!  Anchored up and began the long wait for time to begin fishing…long wait.

Tournament begins and we get the lines out with much anticipation….however, after over an hour of waiting with lots of bites but no takers, we begin talking about our next move.

Next move, was some shallow water in the area.  We marked some good fish, but not takers.

Next move, drag a mid depth flat on a channel.  Caught another small blue catfish.

Next move, drag a deep flat.  Caught another small one.

Next move, switch areas of the lake and looked at a variety of areas and depths.  We didn’t find anything we felt would win a tournament.

Next move, go shallow, really shallow.  We went to the very back of a flooded area and fished the grass.  We managed to put a 15 pounder in the boat and another couple of small fish.

Unfortunately, we ran out of time to get a couple of big fish.  We had a blast seeing old friends and fishing against some of the best catfishermen in the world.  The bite was poor for everyone and has been poor all winter.  We never got the cold snaps we needed to send the fish into winter feeding mode.

We look forward to competing next year!