Fort Gibson Lake White Bass fishing with a great group from North Dakota and Kansas.  They also got to learn that here in the south we call white bass, sand bass 🙂

We had planned on starting the trip at sunrise, but old mother nature had different plans with hard rain and lightning shooting across the sky.  A major front was passing that went from the Texas coast all the way up into Nebraska.  At about 7:15 while sitting at the boat ramp and the radar looked like it was breaking up just in the area around the lake.  We waited a few minutes to make a decision and the updated radar proved to be breaking up just in our area. 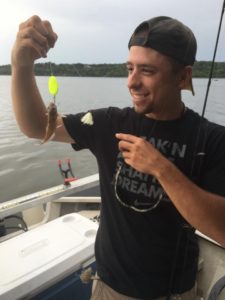 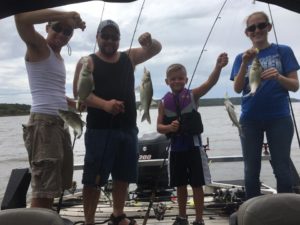 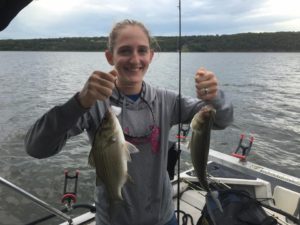 We got the boat in the water and headed to a couple of shallow points that drop into deep water.  We caught a half dozen good white bass, but not the feeding frenzy we were hoping for.  So, off to a rock pile and we caught a few more.  Then a shallow wind blown rocky ridge catching a few more.  Then we made a run to an area that was getting blasted by the wind that had kicked up on the backside of the storm.  We found a few surfacing fish, cast out, and all hooked up, but then they disappeared.

We had just gotten on plane to head back to our first area when I saw one bird hit the water.  The birds didn’t stay, but something told me to go graph the area with the wind blowing into it.  I marked a few fish and decided to drop the trolling motor and not disturb the fish if they were on this really shallow sandy point.  I told the group that I would make a few casts and see if it was worth fishing.  First cast and I never got the bail flipped before I was doubled up.

I got the MinnKota remote, hit anchor lock, and we managed to boat fish after fish for a couple of hours.  The stars aligned and it turned into one of those magical days on the water.  I’m pretty sure we surpassed the 200 fish mark with them keeping about 40 for their grandparents a fish fry.  The nine year old boy is not ruined and fishing will never be the same for him.  His ear to ear smile and laughter as lost track of how many doubles he caught in a row.