Round #2 on Fort Gibson Lake in Oklahoma snagging spoonbill paddlefish.  Mike is leading the points race with a 54 pounder yesterday.  I believe Steve kept a 38 pounder and Dale with a 43 pounder.

These guys are a riot to have on the boat.  It’s nonstop laughs as they reel in each fish and poke fun at each other at any opportunity.  They each caught decent fish on their first fish of the day, but with Mike sitting at a 54 pounder, nobody wants to keep one letting Mike get the win.

Mike was the first to keep one and it was another 50+ pounder.  Mike is now sitting back running his jaw enjoying the others try and catch up.  Mike is at over 100 pounds in his two fish kept for the weekend.

Steve is the next to cry uncle and give up after a high 30 pounder flat wore him out.  It peeled drag and made at least 4 big runs almost bring the poor guy to tear.  We got in the boat and he said, “tag it!!!”

Dale had a strategy going into this race each day.  His plan was to let the other two wear themselves out and then he’d catch fish until he got the biggest.  This didn’t work out for him yesterday.  His arms gave out before he was able to get the big one…however, today that plan proved to work.  He landed a very nice fat 66 pound female and proceeded to rub it in!!! 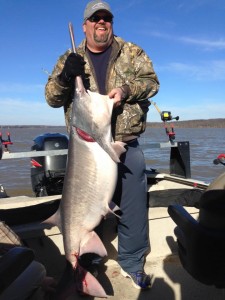 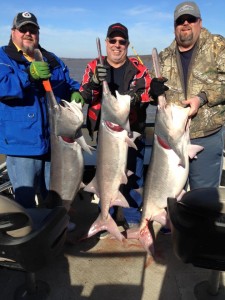 I look forward to next years spoonbill paddlefish trip with these guys on Fort Gibson Lake.

For more up to date information, visit our Facebook Page