Fishing the Spring River on Grand Lake for white bass with new customers, Adam and Nate.

We got an early start this morning trying to beat the crowd and get an early bite.  We beat the crowd, but the fishing was fairly slow the first couple of hours.  We were catching, just not very quickly.  A little before noon we finally got on a steady pattern and consistently put fish in the boat. 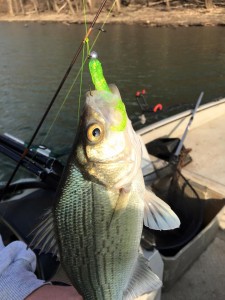 Slow rolling GoGo Minnows from Fle-Fly on the mud line created from all the boat traffic wakes was the ticket.  The waves crashing against the mud bank creates a mud line about 10-12 feet away from the bank.  The white bass use this for ambushing their prey.  We would work the bank throwing both pearl and chartreuse 2.5″ GoGo Minnows on 1/8 ounce head on a double rig using 8 pound test line.  We would cast it near the bank and begin slow rolling, slow enough the lures were ticking the bottom.

Sometimes they would just nail it…other times, they would hit it several times before your rod would load up.  If they are just lightly hitting it, just keep working it until you feel a steady pull and set the hook.

We didn’t spend much time fishing for crappie, but the ones we did catch were pretty good fish.  We would cast over a brush pile and slow roll it over the top.  Same lures and rig as for white bass, just over brush piles that our graph showed crappie hanging in. 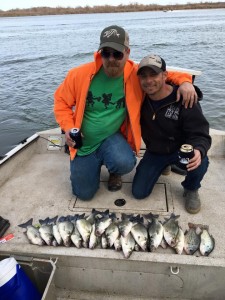 We had a beautiful February day with really great customers.