Fished with first time guests Dwight, David and Sam this morning on Eagle Mountain.  The bite was odd and the weather was even more strange to start the day with the wind changing a dozen times from the north to the south over and over and a crazy dark clouded fog rolled over.  The fish were just gill slapping the bait and not eating well until the wind finally made it’s mind up and stayed from the NW.  We had 50 fish on the clicker at 10am and decided to try a spot out  of the gusting wind, but didn’t find any fish.  So, we decided to head for a ridge and battle the wind and we were all glad we did. It took 20 minutes to complete their limits and then we started fun fishing.  Had a little competition going and ended the day with a little over 200 fish caught.  The last hour of the trip was the fastest bite of the year.  Man, I am tired from running the trolling motor in that wind.  Great day on the water and had an absolute blast fishing with these guys.  Hope to do it again soon. 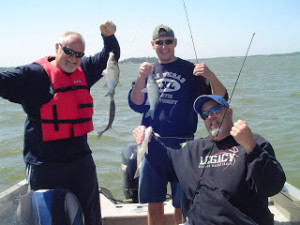 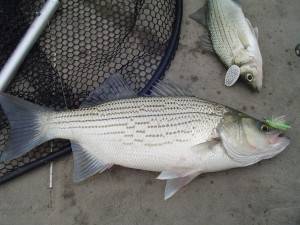 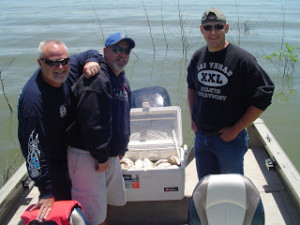 Fished a corporate trip today on Grapevine.  Had to guys from China who had never been fishing before and had no idea what to expect.  They were a riot to have on the boat.  One of them caught 3 doubles in a row and did a nice dance and kissed his fish.  Caught them in 20-24 ft on windblown rocky shoreline.  Found them on the graph and they stayed put all day long.  We left when the bite slowed at one point, but after not finding more fish came back.  It was fish on again! Had a great time watching these two guys catch their first fish ever.  They kept taking pics with their phone and sending them to all their friends.  They said this was their best afternoon in years. 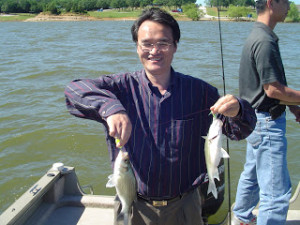 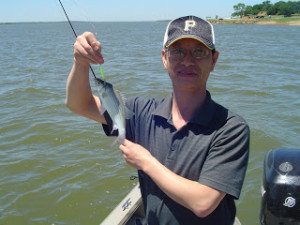 Today was supposedly going to be stormy and it ended up being very nice on the lake.  The morning started out really slow and it took a couple hours to get bit.  I think the lightening storm that came through gave them lock jaw.  Once they started biting it was on!  Caught fish all over from the island to the dam.  The birds gave us a few tips, but for the most part you had to rely on your graph to find them.  The morning trip fish were caught between 14-26 ft.  The two guys on board broke their curse of fishing and boated many more than they had previously ever caught.  Only stopped to take a few pics.  They decided to keep a few for a family fry. 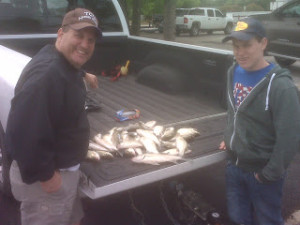 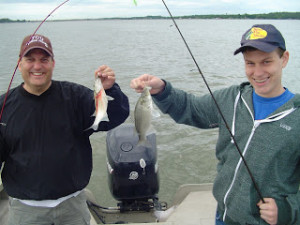 The afternoon trip was a teaching trip that turned into a catching/teaching trip!  The fish were very active and willing to bite during the afternoon until the wind picked up around 4:30.  The guys had their first double, most fish caught in a trip, largest, learned alot, and we had a blast!  They didn’t want to keep fish, so we just had fun catching. 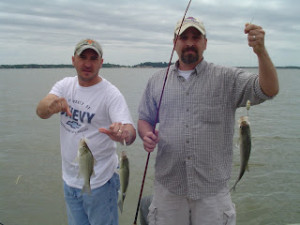 The fish in the afternoon were relating to drop offs from 22-27 ft.  Caught fish every spot we tried.