The crappie were slow…really slow this morning.  They decided to start releasing 15,000 out and shut the bite down, so we caught bait and started dragging deep water for blue catfish that were busting up bait balls.  I started marking good shad in the river channel at the edge of a point.  As I came up out of the river channel from 55ft of water to water in the 40ft range the bait was getting busted up with nice arches under and mixed in.  We circled back and set up a controlled drift to drag baits with the MinnKota trolling motor.  I started drifting at .7mph and we got a couple of taste testers, but they wouldn’t commit and take the bait.  So, I lowered out speed to .5mph and that did the trick.  The right long line rod slammed down and peeled drag making it very difficult for Brandon to get out of the rod holder.  This blue had an attitude and did not want to get in the ProCat with us…but Brandon won the battle! 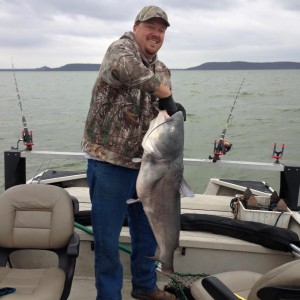 After a couple of fish on that drift, we decided to do some scouting and check on the spoonbill/paddlefish.  The Oologah Lake spoonbill are all stacked up and ready in their usual locations this time of year.  Next Sunday, we’ll get after them…but back to searching for other areas for blue catfish.

We decided to use the Humminbird side scan and locate fish in the long expanses of Oologah Lake’s shallow water since the south wind picked up and should be moving these fish into feeding areas…it did.  We looked in really shallow water, but the the higher concentrations were using road beds and ditches to travel.  We would set up just off of these areas after marking on side scan and cast towards the fish.  FISH ON!  We’d catch a handful in an area and then move on looking for another group.  I’m sure we could have set there and waited for the next group to move through as blue catfish often do, but we really wanted to keep trying other areas that we hadn’t fished or at least not fished in some time.  Oologah is a big lake with lots of structure and its a blast using the graph locating new areas or areas forgotten to find new groups of fish.

Brandon said he cleaned 17 nice eating sized blues and we released all the fish over 10 pounds to continue making baby blues so we have plenty to catch for years to come. 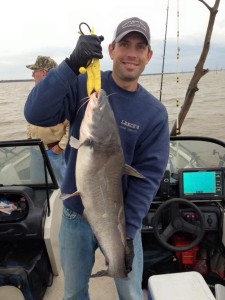 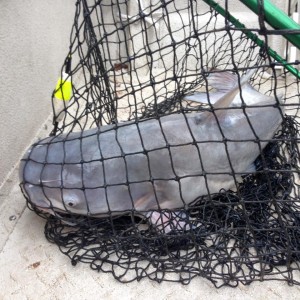