Zach and his two kids joined us for a morning snagging spoonbill paddlefish at Fort Gibson Lake in Oklahoma.  We set out four lines and began trolling at about 8:00am.  It was a beautiful calm January morning with a very light breeze and sunny skies.  It wasn’t long and both young men were warmed up with their first spoonbill paddlefish in the boat.  Quick pictures, and back in the water to be caught another day! 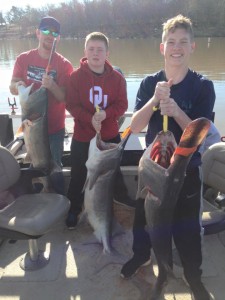 Next up, Zach got to show the boys how to wrestle a prehistoric spoonbill paddlefish into the boat!  After they each fought their first spoonbill paddlefish, they decided they would keep their next fish.  (They realized that reeling in one of these freshwater monsters made them use muscles they weren’t used to using, lol)

It was fun watching this crew go to battle and cheer each other on as they each reeled in, tagged, and released into the 100 gallon SeaArk Procat livewell.

Trip #2 was our good friends from Woodward, OK, Dale, Steve, and Mike.  These guys are a hoot to have on the boat and there is never a dull moment when these guys get together.  After a quick exchange of giving each other a hard time, we got the lines in the water and FISH ON in less than a minute!!!

We didn’t want these guys to have time to get warmed up.  Nothing like wrestling big fish right out of the gate.  They each had a fish on in less than ten minutes….I’m not sure which one had the smallest to start with because it got put back in the water quickly…

After they each caught a couple, Mike got a 54 pounder and called it a day just daring the others to find a way to beat his as he reclined back in the chair soaking up the warm sun. 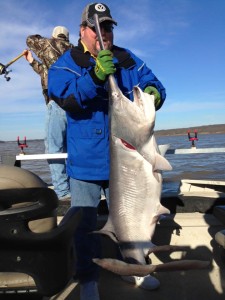 Dale and Steve caught several more each wearing themselves out, but not any of them big enough to eclipse Mike’s mark for the day.

Day 1 puts Mike in the points lead.  We’ll have these guys again tomorrow to continue this race.